I love the subtle flavour of Butterscotch in your new product. I've used it in my Protein Ball mix and they are delicious. Also great in a smoothie with Almond Milk, banana and macadamias. 🌺 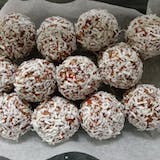 Thanks Julie - they look delicious. Glad you're loving the product and would love to get the recipe :)

Cocoa Siesta really gives me a sense of calm & relaxes me into slumberland very easily. It tastes great & I know it is good for me! I don't normally drink hot chocolate before bed because I always believed the chocolate would keep me awake but I was wrong!!

Thanks for the lovely review Judy and so happy to hear you're enjoying the calmness of Cocoa Siesta. p.s. its not chocolate that keeps you awake, its the sugar content in chocolate and given this is sweetened with monk fruit - it wont disrupt your sleep (as you know) ;)

Thanks for your review Melissa, yes give it some more time as it can take longer for some to feel the effects. Your hot flushes aren't lasting as long, so that is a good sign its starting to work. :)

Definitely noticed the difference from taking this, amazing product and very tasty.

Thanks for the review and happy to hear you're loving it :)

There are few spices that can be used for both sweet and savoury dishes. Cinnamon is one of them. This spice is derived from the inner bark of several tree species from the genus Cinnamomum. The name also describes its particular medium brown colour.

There are a number of species of commercial cinnamon available in the market, but two of them are most prominent. The first one is Cinnamomum cassia which is your most common commercial type of cinnamon. The second one is Cinnamomum verum or Ceylon cinnamon, which is said to be “true” cinnamon and is believed to be more beneficial to health (due to the presence of significant amounts of coumarin) than the common kind.

The spice makes its way into chicken and lamb dishes and into pastries, toasts, cereals, and fruits such as apples. It is also added to specialty drinks such as eggnog or alcoholic beverages like Fireball Cinnamon Whisky. Not only does cinnamon add lots of flavour to food, it also has a ton of health benefits.

Cinnamon is such an important spice, that it was given as gifts to kings! It is famous for its healing properties and its beneficial effects on health and metabolism. For example, did you know that cinnamon can reduce the risk of diabetes by lowering blood sugar levels? It improves the body’s glucose intake by decreasing the amount of glucose absorbed in your bloodstream and by slowing down the breakdown of carbohydrates. It also helps reduce insulin resistance by improving insulin sensitivity which in turn can help fight the onset of conditions like type 2 diabetes and metabolic syndrome.

Cinnamon can also help reduce the risk of heart disease. It lowers bad cholesterol and triglycerides levels without reducing the levels of good cholesterol.

A compound in cinnamon called Cinnamaldehyde is the key factor to its healing properties. The very same compound is significant in its ability to fight off fungal and bacterial infection. Not only does it help fight off infection, it helps in reducing inflammation as well.

Feel and look young with cinnamon

Cinnamon is loaded with antioxidants, you know, those substances that prevent or delay cell damage caused by damaging oxidising agents. Antioxidants are famous for helping keep our cells young and healthy. Its antioxidant properties can also help with reducing chronic inflammation that can damage tissues. Imagine how cool it is that you could get all these health benefits from a small dash of cinnamon in your drink?

Thyroid Issues and What You Should Know About Them

Here are some signs that your thyroid doesn’t make enough thyroid hormones (hypothyroidism) or that it makes too much (hyperthyroidism).
Read More

Why Magnesium Is Important For Hormone Balance

For people who recognise the signs of a hormonal imbalance they are often told to increase their intake of certain nutrients. The most common ones you would hear are B Vitamins, Omega-3 Fatty Acids, and Vitamin D. However, one of the most essential (but not often mentioned)  nutrients to help balance hormones is Magnesium.
Read More

Foods That Nourish Your Thyroid

Eating a well-balanced diet that includes lots of fresh and organic produce and protein can help regulate thyroid function. Here are some foods that can help.
Read More